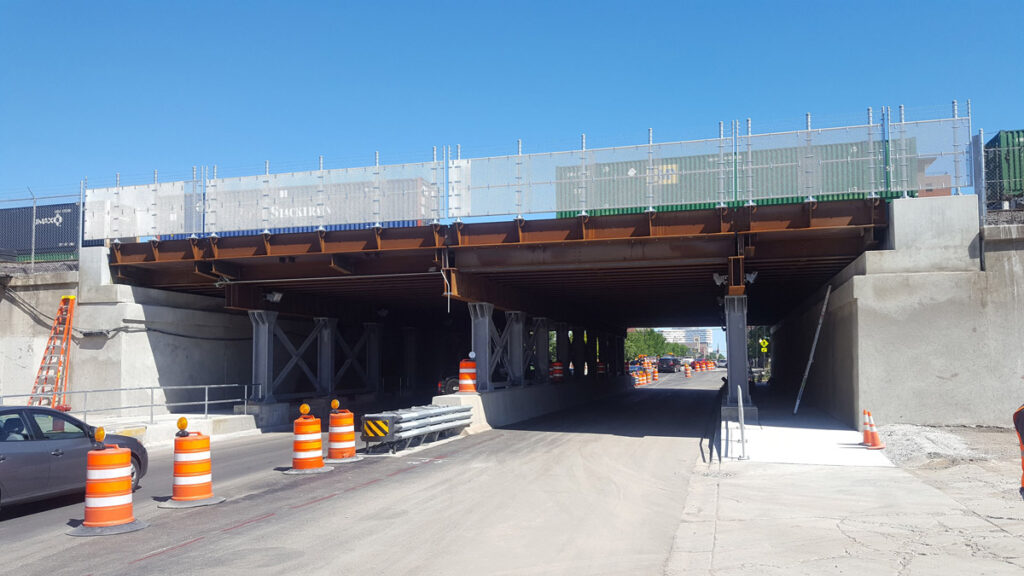 Union Pacific Railroad’s Rockwell Subdivision carries freight over a 1.8 mile stretch on Chicago’s West Side and serves the Global One Yard. Bridge 3.49, built more than 100 years ago, supports nine tracks that serve the intermodal yard, crossing over Ashland Avenue, one of the city’s busiest thoroughfares. To upgrade aging railway infrastructure and improve traffic flow for an estimated 30,000 vehicles every day by creating a wider passageway, Union Pacific Railroad (UPRR) undertook the replacement of outdated Bridge 3.49.

Gannett Fleming provided structural evaluation and design, as well as transportation design and construction management services, for the project. A key part of the firm’s work was the creation of an innovative staging plan to ensure that six tracks of the nine-track railroad remained active. The plan shut down tracks in three phases, allowing the new bridge to be built with track outages limited to only three-track, 75-hour closures, during periods of lighter rail and road traffic.

Early in the project’s life cycle, our firm structurally evaluated the four-span ballast deck viaduct, featuring two steel curb piers and one center median pier, to determine that the abutments could be reused for the new structure. During the staged track outages, the tops of the abutments and the backwalls were removed. Precast concrete blocks serving as a combined bearing seat and backwall were placed on quick-setting grout. To ensure that this work could be completed as planned, preliminary field investigation and inspection was performed in tandem with the construction management team.

Our team also provided design and specifications to replace the piers, including foundations. As pre-stage work, new pier foundations supported on micropiles were built between the existing pier column foundations. This work was completed underneath the existing bridge with only one side of Ashland Avenue closed at a time to minimize traffic disruption. After the existing columns and foundations were removed, a crash wall was constructed, connecting the new column foundations together. Gannett Fleming constantly monitored and recalibrated the construction schedule alongside the contractor, coordinated closures of Ashland Avenue and UPRR tracks, and worked around the clock to overcome challenges during the staged outages.

Uninterrupted freight service on at least six tracks during construction.