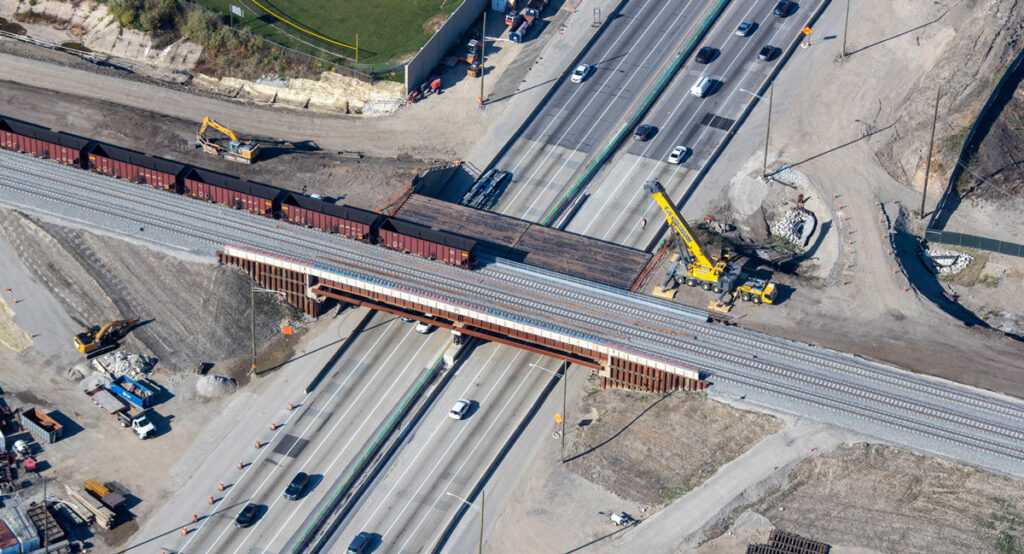 Gannett Fleming was selected to develop the Master Plan and complete Phase II engineering master plan and final design services for the proposed reconstruction of the BNSF Railroad Bridge (BN 261) over the Tri-State Tollway. The existing BNSF Bridge carries three mainline tracks over eight traffic lanes of I-294, and the existing bridge will be replaced and lengthened to accommodate future expansion and widening of the roadway. The proposed bridge consists of two equal spans measuring 106′-6″ and utilizes deck plate girders supporting a ballast deck. The abutments consist of a drilled shafts with concrete facing to retain soil embankment, which limits the amount of excavation required during construction. All rail traffic will be maintained during construction by use of a three-track temporary shoo-fly alignment, which one span will be incorporated into the final track configuration as a maintenance of way track. Shoofly alignment and vertical profile adjustment were constrained by existing Metra station passenger platforms located 1,200 feet west of the bridge.

Additionally, constructability aspects have been incorporated into the final design as the site is constrained by park land in three of the four quadrants, and a public works facility in the fourth quadrant. A scheme was developed requiring all truck traffic to enter the site via the Tollway to reduce the amount of construction traffic on Village streets and material storage. Other noteworthy project highlights include, enclosure of an open channel creek in a box culvert creating additional park space for the municipality, temporary and permanent retaining wall design supporting railroad loading and earth embankment, earthwork management, relocation of water main and sewers facilities, utility relocation, ACOE, IDNR, IEPA, and FAA permitting requirements, and assisting with inter-governmental agreements, railroad, and Illinois Commerce Commission coordination.

Extensive coordination with the BNSF Railroad was provided to ensure construction staging, maintenance of rail traffic, and constructability of all improvements were developed and designed for compatibility with railroad requirements. Rail traffic over the bridge exceeds 140 trains per day, carrying BNSF’s freight traffic as well as Metra’s busiest line with an annual ridership of approximately 16 million.