Brutal architecture with good bones—that’s how Phoenix Sky Harbor International Airport leaders described their 1970s era Terminal 3 building. A mass of cast-in-place concrete columns, beams, and concrete walls, its low ceilings and narrow windows created an interior that was dark and inward looking. The aging building was struggling to meet increased passenger demand. With annual volumes projected to increase by 18 percent to 51 million passengers in 2024, the city selected the Hunt-Austin Design-Build Team, including Gannett Fleming structural engineers, to transform its aging Terminal 3 into a modern, world-class facility capable of meeting the needs of a new generation of travelers.

Reinventing the facility required a complete reworking of interior spaces and substantial structural alterations. Engineers were challenged to strip away concrete to create open, light-filled interiors, while ensuring that the altered building met current codes. An addition on the west end of the building allowed the floor plan to be reorganized to improve circulation, create a new consolidated security checkpoint, and reconfigure the ticketing area. Described by Phoenix Mayor Greg Stanton as a “first-class customer experience,” the reimagined 334,198-square-foot facility is a complete departure from the original terminal and a renewed source of pride for the Phoenix community.

Using tools like Lidar scanning and 3-D point cloud surveying, the team developed a detailed model of the existing structure, allowing engineers to test design options for constructability and quickly answer the recurring question, “Can we do this?” The new plan removed 56,600 square feet of underused floors to create a Grand Hall for passenger circulation, retail, and concessions. Bulky precast window frames were replaced with glass curtain walls, and precast roof members were removed to install 14 geometrically complex skylights, bringing daylight and views into the interior. The 29,380-square-foot west end addition, built over an existing electrical building, provides three new escalators and elevators that serve as the main interface with the PHX Sky Train® Portal.

The team tackled issues related to code compliance, function, and aesthetic form, all within the confines of cost, schedule, and the limitations of the existing structure. The structural alterations were substantial, ranging from adding weight or removing gravity members, to modifying portions of the floor and roof diaphragms and lateral force resisting frame elements. Crews removed 4.3 million pounds of concrete from the structure, including 54 single tees, 42 double tees, and 11 cast-in-place concrete beams. Gannett Fleming’s structural engineers offered innovative solutions, from designing custom heavy girder hanger plates to fill in a 30-footwide escalator well, to building an addition over top of an existing building, to make the owner’s vision a reality. 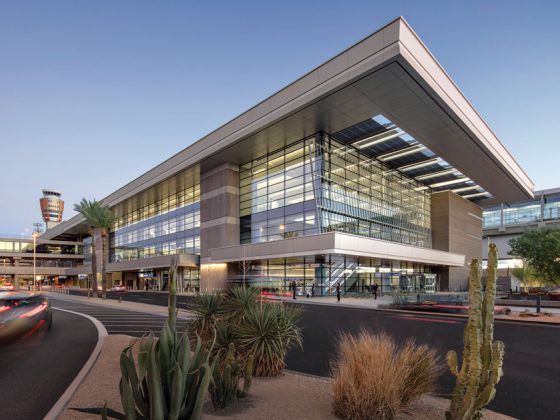 The sleek, modern appearance of Terminal 3 is a complete departure from its original concrete enclosed structure.
More 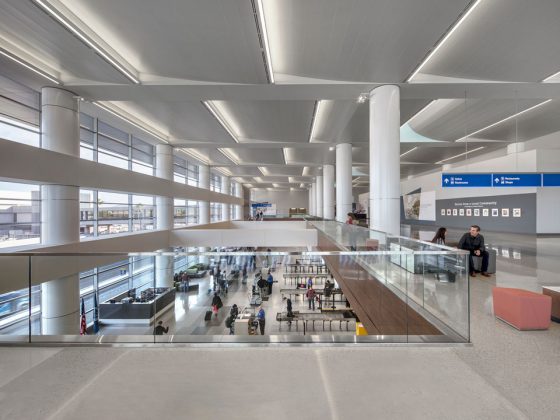 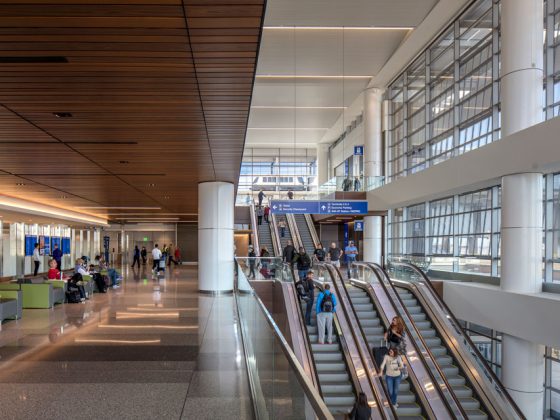 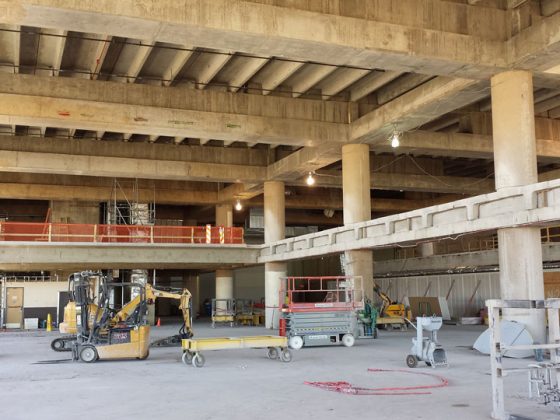 Crews demolished the precast double tee floor slab on Level 4 to create the vaulted space for the Grand Hall.
More 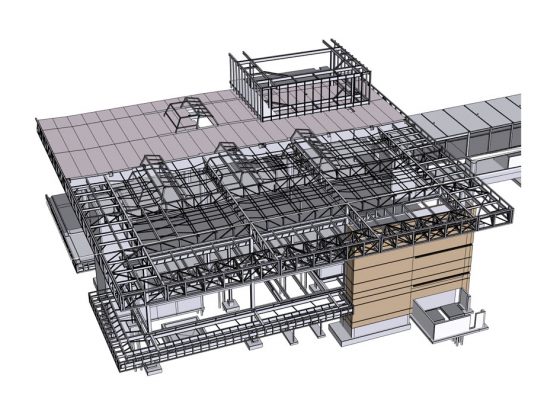 The BIM model shows the structural plan for the 29,380-square-foot addition built over top an existing building. 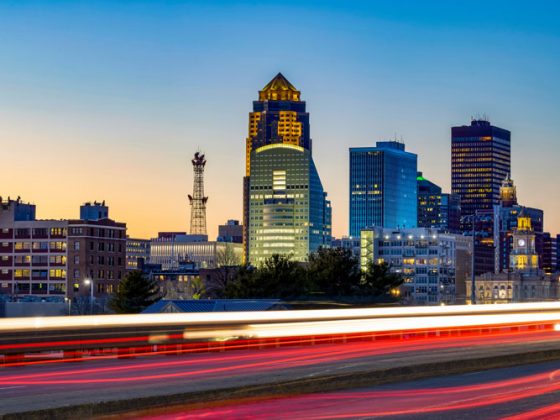 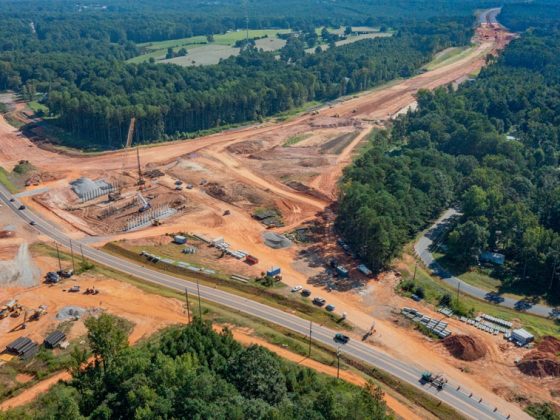 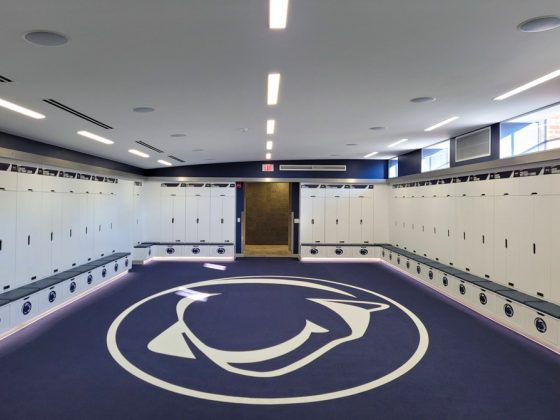 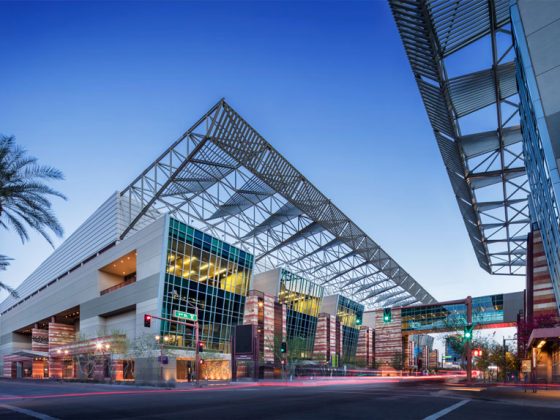 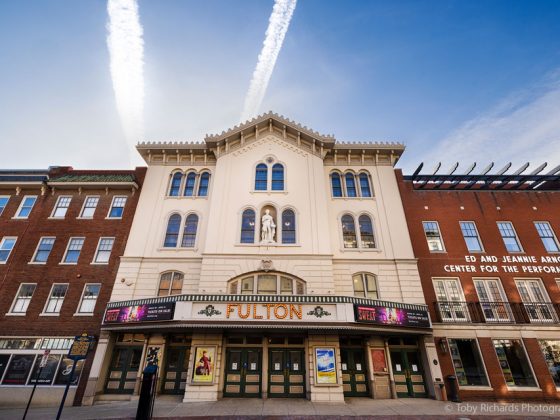 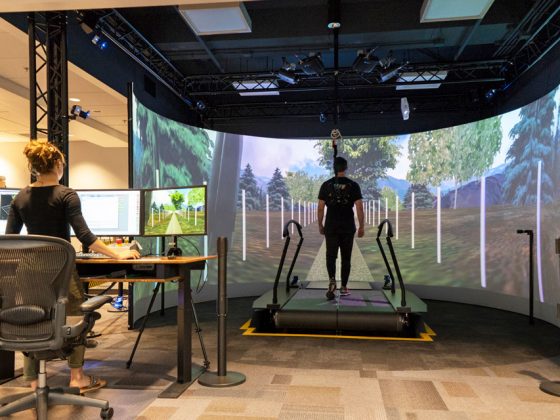