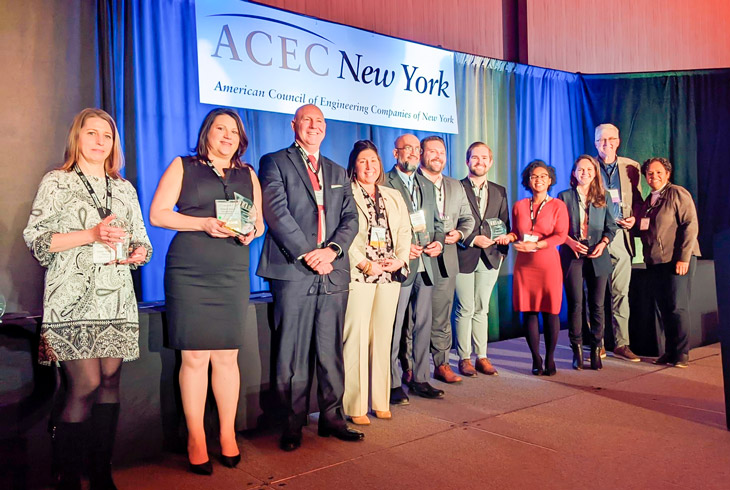 “At Gannett Fleming, we build our diversity initiatives and programs around the goal of making Gannett Fleming a rewarding, equitable, and safe place to work for all,” said Gannett Fleming Chairman and CEO Bob Scaer. “Through a diverse and inclusive workforce, we create more significant equity in the communities we serve, and we are proud ACEC New York acknowledged our efforts.”

With the DEI&B Award, ACEC New York recognizes member firms “that have launched a program or initiative to attract, hire, and promote personal and professional growth opportunities for women, people of color, LGBTQ+ persons, and other underrepresented people in the engineering industry in New York.”

Gannett Fleming promotes a culture where DEI&B isn’t just a matter of compliance; a strong commitment exists for employee empowerment, and all employees are encouraged to bring forth new ideas. Through this commitment, the firm has launched multiple DEI&B programs and initiatives, such as:

A Quantifiable Effect on Employee Recruitment, Retention, and Engagement

Gannett Fleming currently boasts the largest number of women and minority employees in its history, and during the firm’s 2021 employee engagement survey, organized by a third party, 91% of employees said they would recommend Gannett Fleming as an employer to their family and friends.

This survey also included a section called “Individualize Engagement.” The questions in this portion of the survey ask whether respondents feel that Gannett Fleming has a culture of diversity and inclusion and if they feel diversity is respected at Gannett Fleming. The firm saw a positive increase in this section from 80% agreeability in 2018 to 86% in 2021.

Formed in 1921, ACEC New York has been a leader in promoting the engineering industry as well as creating opportunities for education, advocacy, and networking. The second-largest member organization in the National ACEC organization, ACEC New York has shown a commitment to DEI&B through their values and holding webinars throughout 2021 highlighting important aspects of DEI&B. The DEI&B Award was launched in celebration of their mission and 100th anniversary.