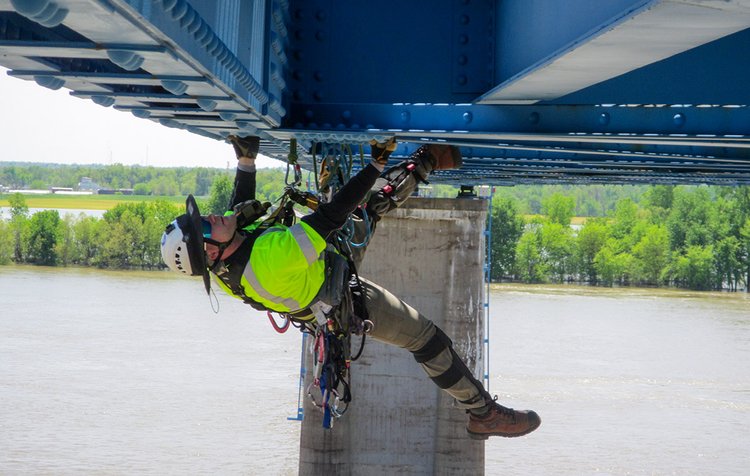 In our daily excursions, we typically drive over a bridge or overpass without much thought. These engineering marvels can span miles of terrain or water, or they can also be a small span on your local route. But with the nation’s infrastructure aging and sometimes crumbling, along with massive proposed federal infrastructure spending, bridges are in the spotlight.

Maintaining bridges requires a two-fold solution. One is the rehabilitation of the bridge that drivers can see in a construction zone. The other is the bridge inspection, where certified inspectors carefully examine the entire bridge for structural and safety deficiencies. Their goal is to quantify and prioritize deficiencies that affect the structural components and safety, which can assist bridge owners in evaluating maintenance needs and managing their bridge life cycles. However, some critical findings can lead to catastrophic consequences in the near and long-term, which require immediate attention.

What is the bridge inspection process, and how is it done? New technologies have been implemented, including industrial rope access techniques and drone imagery that allow bridge inspectors safer and more reliable access in hard-to-reach areas. Let’s look at some traditional and newer bridge inspection techniques.

According to the American Society of Civil Engineers, there are 614,387 bridges in the U.S. These include rural spans and massive urban suspension types like the Golden Gate Bridge. Don’t forget the over 61,000 rail bridges and thousands of aqueducts, causeways, monorails, and elevated subway tracks. Any suspended structure that carries people, vehicles, and rail over its span needs inspecting.

Every state has its own bridge inspection standards. However, most concur with the federal guidelines from the U.S. Department of Transportation that mandate bridge spans over 20 feet are to be inspected every two years. Bridges deemed structurally deficient are often inspected more frequently. Inspections look for flaws, defects, or problem areas that need to be addressed, either by further examination or repairs to fix the problem. The primary goal of bridge inspections is to find issues before they become hazardous to the structures’ integrity and to public safety.

Traditional bridge inspection methods include ladders, bucket trucks, boom or scissor lifts, or under-bridge inspection vehicles (snooper trucks) to access areas from the bridge deck above and below the roadway. Lifts can also be mounted on boats to inspect a bridge from a water crossing underneath. Advancements in bridge inspection methods, such as industrial rope access techniques and drones, have provided efficient alternatives to these types of access equipment. 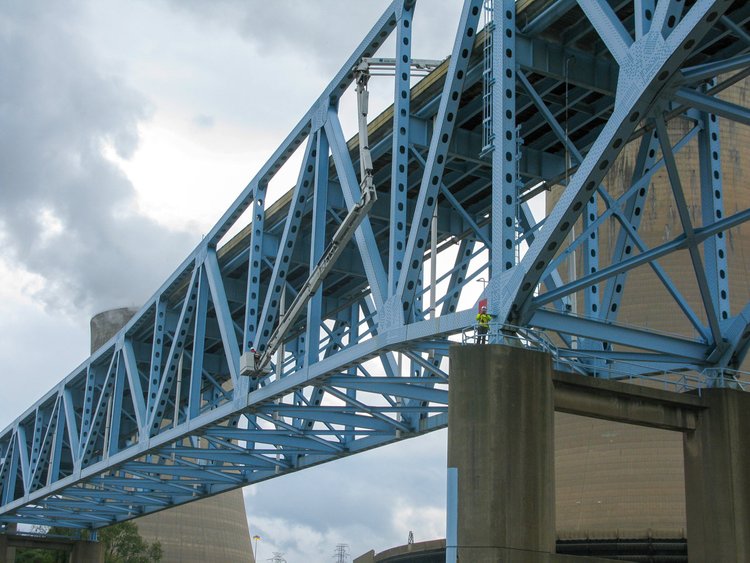 Before a bridge inspection, a plan is devised for the schedule and methods used to study the structure. Several inspection types can be assigned, depending on the bridge’s size, type, location, and condition.

As noted above, most bridges are inspected every two years, and routine inspections are part of an owner-mandated inspection schedule. Inspectors look at the current bridge condition and compare it with previous inspection cycles, noting any changes to structure or roadway.

Inspections of bridge components deemed crucial for its stability are called “fracture-critical.” These are tension members or tension components of members whose failure would be expected to result in the collapse of the bridge; these are typically found in steel bridges such as trusses and suspension spans. A detailed, visual, hands-on inspection is the primary technique of detecting cracks and other anomalies.

Special inspection occurs at irregular intervals for either deficient structures requiring closer monitoring or after a special event, such as seismic or impact damage. During these types of inspections, special testing methods may be used, including underwater, ultrasonic, acoustic, thermal, and ground-penetrating radar inspections of specific components.

Traditional inspection methods using bucket trucks or snoopers have been used for decades. But there are times when these means of access are economically and practically limited by bridge size, structure type, traffic demands, and costs. Ideally, bridge inspections are done while traffic is flowing on the bridge deck. But restrictions in weight, traffic volume, or bridge layout may require newer methodologies than traditional inspection techniques.

Bridges with inaccessible sections are now examined through rope access methods by inspectors certified by the Society of Professional Rope Access Technicians (SPRAT). According to SPRAT, the organization “was established in the mid-90s to address the needs of a growing number of companies and operators employing rope access techniques in North America. The development of modern rope access systems collided with industries that provided conventional means of access such as scaffolding and swing-stages. These conventional methods required standard fall arrest systems.” SPRAT-certified inspectors can access remote and hard-to-reach places without shutting down the bridge for extended periods. 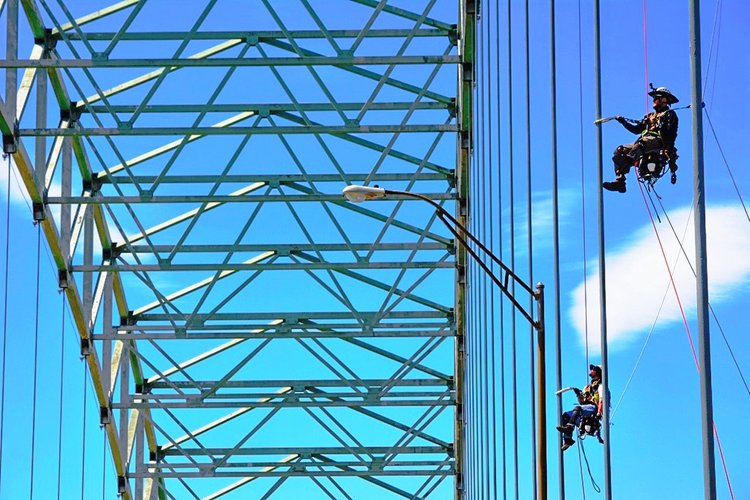 The use of drones has permeated many parts of our society. Many industries have found drone technology useful, including agriculture, emergency rescue, wildlife conservation, and urban planning. Another valuable task for drones is bridge inspection. Their ability to access hard-to-reach superstructure sections has become a go-to option for many bridge inspectors in their reconnaissance and planning efforts.

Bridge drones are typically equipped with HD cameras and proximity sensors to provide high-quality and detailed images which engineers can use to identify defects, wear, and potential access concerns. The increasing use of drones has added additional technologies to their output, including the use of analytics, artificial intelligence, and 3-D imaging that can show cracks, spalls, wear, delamination, and rust.

Drones provide a quicker, safer, and inexpensive alternative solution for assisting inspection of a wide range of bridges. Though their use does not satisfy the hands-on requirement of fracture critical inspections, their use in planning and gathering data on intermittent inspections saves time and provides additional data. They’re also helpful to inspect bridges quickly for defects after natural disasters or accidents, providing faster mobilization and visual assessment of the structure. 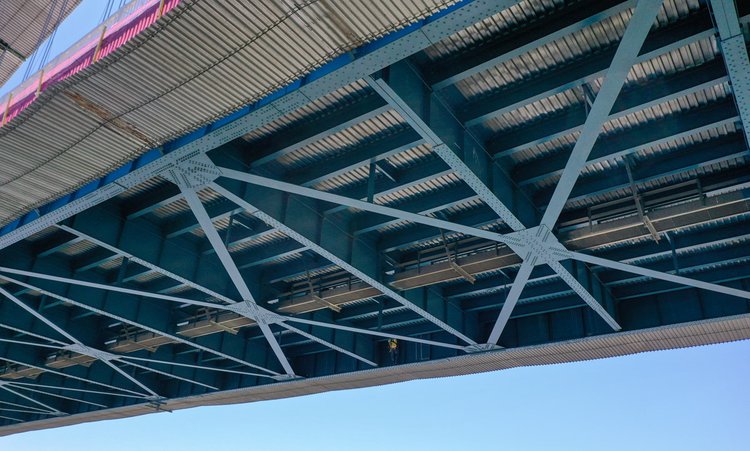 From industrial rope-climbing and rigging to snoopers, man lifts, and boats, we use the right combination of access methods to minimize impacts to vehicular and river traffic while keeping the project within our clients’ budget and schedule. We employ SPRAT Level I and II professionals and routinely use drones piloted by our FAA-licensed, NBIS-certified inspectors to plan and/or to perform inspection assignments more effectively and with minimal disruptions to traffic.